Andrew Verity, the creator of Neuro-Training, the workaholic researcher who has always given his genius and to the well-being of as many people as possible, passed away, in a crude and unexpected way, on February 9th 2022.

He leaves an immense legacy, tools of incredible power to support the evolution of people.

My adventure with Neuro-Training began in 2010 and then Andrew Verity (no, it’s not a pseudonym, that’s his real name!) was in my eyes a kind of sacred monster to whom I owed the tools I was learning. Since 2014 I have had the privilege of following him closely. In fact, from that year on, Andrew began traveling regularly to Italy, dedicating days and days to transmitting knowledge, insights, experience, results of his research, procedures and tools, with patience, generosity, passion, without ever sparing himself. Sometimes I ran after him in other European countries. Very often in the last years I was his interpreter, familiarizing myself with his Australian accent (and translating his many jokes!) thus internalizing his teachings even more. 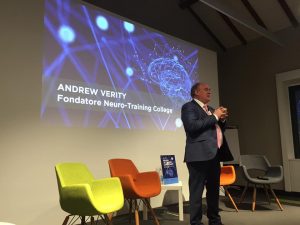 Each workshop with Andrew was a party, a party for the Soul, of the Mind, of the Heart.

Four, six, eight days were nothing because we listened to him without stopping or getting tired: every millimeter of his teachings was imbued with meaning, ideas to clarify more and more the reality of the functioning of human beings and the most sophisticated tools to support them in their maximum expression.

Always with a single beacon: encouraging knowledge, awareness of how we as human beings can not only cultivate physical health, but above all manifest ourselves in our splendor, becoming the creators of our reality, and not “a symptom of our past” , as he often said.

The news of his sudden death was like a stab wound to me, followed by warm tears.

After a few days, I feel strongly the responsibility to transmit and build on his legacy, sharing the results of his 45 years of research for the benefit of many people, with his same passion.

Keep on working with colleagues and keep this fire alive.

I know I was blessed to meet him on my way. I know that all my colleagues share this feeling, without any exception.

It is enough to read these tributes to understand how much he was loved and esteemed..