The higher the level, the greater the challenges and pressure.

Thanks to company yoga programmes, male and female employees can now learn how to slow their breathing rhythms naturally. This improves their physical, emotional and mental health immensely as well as boosting their ability to take intuitive decisions, make the right choices and generally operate more effectively.

Meditation for companies is a modern breakthrough. Many companies, especially in the USA, but also in Italy, now opt to invest part of their budget in schemes where employees are given time and space for physical and psychological relaxation. These tend to focus on yoga and meditation, as numerous scientific studies have shown them to be particularly effective. The most notable research on these matters has been conducted by the American scientist Herbert Benson in collaboration with the Harvard Medical School and his own Benson-Henry Institute for Mind Body Medicine.

The reasons are mainly cultural. David Gelles, the New York Times journalist and author of the book “Mindful Work” points out that in the past our society has been influenced by the beat culture, the hippy phenomenon and oriental mysticism.

Over the years the eastern and western worlds have begun to interact and share their knowledge. So, today, we can benefit from techniques that are thousands of years old and which offer new, effective and alternative ways to solve our problems.

THE FIGURE OF THE MANAGER TODAY

Excessive stress, a lack of mental lucidity, physical exhaustion and burn-out are all potential side-effects of company life, especially for people in positions of responsibility.

THE HIGHER THE LEVEL, THE GREATER THE CHALLENGES AND PRESSURE

So we often find ourselves in a race that seems as if it will never end. We have to constantly readjust our focus on new goals, and there is never time to simply enjoy the moment, or what we call mindfulness. According to Buddhist beliefs, in fact, men have a tendency to either brood over the past or pursue an unachievable future.

OUR MINDS AND BODIES CANNOT SIMPLY KEEP MARCHING ON FOREVER

Sometimes, we have to stop and take a deep breath if we are to make the right decision.
Thanks to company yoga programmes, male and female employees can now learn how to slow their breathing rhythms naturally. This improves their physical, emotional and mental health immensely as well as boosting their ability to take intuitive decisions, make the right choices and generally operate more effectively.

THE RHYTHM OF OUR BREATHING

Yogi Bhajan, the Master who spread Kundalini yoga in the West, taught that we can achieve greater control over our minds and bodies by slowing down the rhythm of our breathing.
When you take deep, slow, long breaths, the mind is constantly focused. Whereas when your breathing is rapid, heavy and superficial, internal dialogues take over and our minds cease to concentrate.

Today, male and female managers need to be increasingly creative and spend more and more time at work. Using subtle, but powerful techniques, meditation teaches us to become genuinely creative, starting from our bodies.
So why not take a look at some feedback from the executives who have used our Yoga Coaching method successfully.

THE BENEFITS OF YOGA FOR COMPANIES

Meditation in the workplace has been so successful that it has even been adopted by the British National Institute for Health (NICE) to treat pathologies like depression.

Using these techniques boosts the well-being of both the company and the individual. It gives employees the tools they need to face challenges successfully and ensures that company team members are healthy, motivated and satisfied.

It boosts the efficacy and productivity of management teams

Groups have time to share experiences on a wide range of issues, which helps reinforce the team’s cohesion

Today, companies need to reach out to the communities around them in a way that is more direct and authentic

Y-C offers both group and individual company yoga and meditation sessions.
Group sessions last half or a whole a day and are organised in tailor-made programmes lasting for 2-6 sessions held at monthly intervals.

A typical Yoga Coaching® session is organised as follows

3-11 minutes daily practice to be performed alone. Rules for starting and performing exercises easily and effectively.

Sharing any feed-back is useful to deepen the experience and get out the most from it.

Yogic principles and down-to-earth Yogic teachings. How and why these exercises work on the systems and help achieve results.

Each exercise is designed to meet specific results that are useful for business people.

Practice areas must be provided by the company, which means any normal meeting room as no special facilities are needed

All the exercises can be done either sitting or standing in an office, and wearing normal clothes 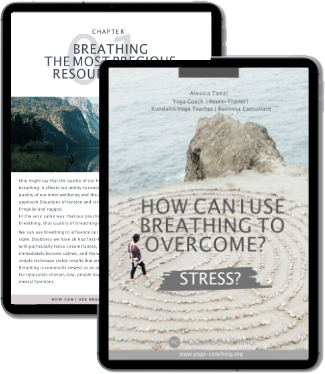